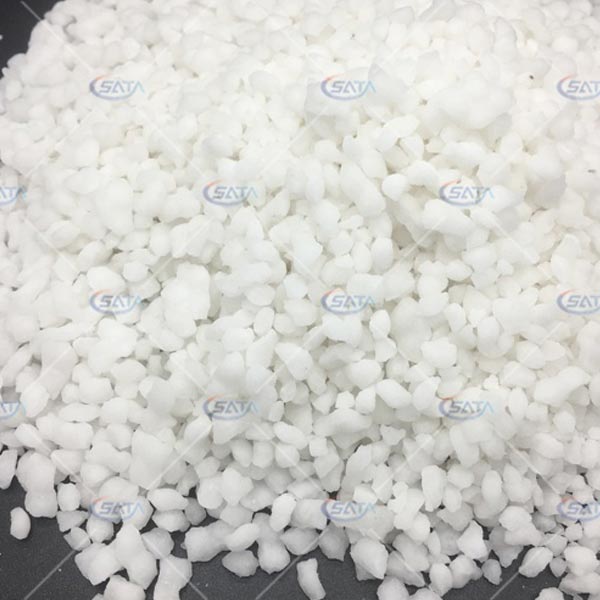 Chemically, magnesium chloride is represented as MgCl2. It is a naturally occurring mineral salt which is mostly obtained from seawater and brine. In its pure form, it can be identified as a colorless, odorless, powdery substance with a bitter taste. It gets dissolved in water easily. Magnesium chloride is a versatile compound with a number of uses in food preparation, health and personal well-being areas, road care and industry.
Chemical formula: Mgcl2. 6H2O
Purity: 46.00%min.
Appearance: pure white Granule
Hs code:28273100
CAS NO.:7791-18-6

Hypomagnesaemia
Research has proved that Hypomagnesaemia mainly in cattle and sheep follows after winter when a herd is turned on to lush spring grass. Hypomagnesaemia is more noticeable in cattle grazing on pastures which have recently received a dressing of nitrogenous or potash fertilizer. By spraying a solution of Magnesium Chloride on grass or even directly on the animal or mixed into the cattle feed, this condition is prevented and has proved to be extremely beneficial to livestock. Magnesium Chloride being environmentally-friendly, will not damage either grasslands or the cattle. For more information contact our dealer.
Horticulture
Plants need several minerals for growth. Magnesium chloride provides magnesium to plants to correct deficiencies in mineral content. Its use in farming is important since it is majorly used to replace magnesium sulfate.
For Controlling Dust
Magnesium chloride tends to absorb a lot of moisture from the air. When its liquid or powdered form is applied on dusty areas such as excavation sites, race courses, etc.. Thus, it prevents small dust particles from flying around and contaminating the air the dust gets suppressed onto the ground.
De-Icing Agent
Liquid magnesium chloride is widely used as an anti-icier. If it is sprayed on roadways before precipitation, it delays the formation of ice and prevents its adhesion to the surface of the road. Thus, it controls the excessive accumulation of snow and ice on the roads in winter months. This, in turn, reduces the chance of skidding of vehicles and improves driving conditions. As compared to any other anti-icer like sodium chloride, it is the more preferred one mainly because it is less corrosive in nature. Moreover, it does not cause any harm to plant life growing beside roadways.